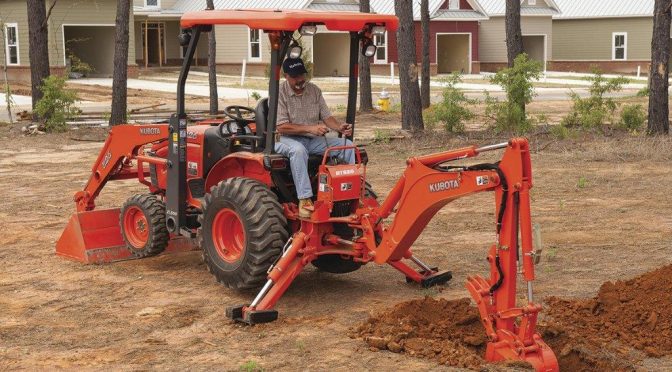 In today’s operating conditions, versatility is right up every machine owner’s buying checklist. Equipment owners often base their new machine selection on a number of common factors such as fuel economy, total cost of ownership and performance.

However, versatility has equally become a key driver of many buying decisions as a go-anywhere piece of equipment is regarded as a boon in any fleet owner’s stable. The latest on SPE’s arrival lounge is the new Kubota B26 TLB, a machine that takes versatility to a whole new level.

Whether the job calls for a tractor with three-point implements, excavating utility trenches, or loading spoil into an end-dump, the B26 can take all the applications with ease. According to Greg Bergmann, Operations Manager at SPE, the new TLB fits between the existing BX25D and the L45 TLB models in Smith Power’s range.

The B26 TLB comes with a third function valve bank on the backhoe as standard. This allows for use of a third function attachment such as a grapple or 4-in-1 bucket, thus maximising the machine’s versatility.

Apart from its versatility, the machine boasts a number of feature upgrades that allow it to offer better overall performance, ease of operation, safety and, ultimately, increased productivity.

At the centre of it all is the 26 hp Kubota diesel engine that boasts an enviable combination of high power, high torque rise, low noise and low vibration. Increased power has resulted in improved backhoe, bucket and three-point lift capacity. The lifting power of the B26’s three-point hitch has been increased by 60%, offering greater versatility with implements. Meanwhile, thanks to larger hydraulic pumps, the machine comes with improved power for tough excavating jobs, while improving the backhoe lift capacity by 18%.

“To help customers get more power and dig deeper, bucket breakout force has been increased by 35%, which translates into more than 203 mm of more digging depth,” explains Bergmann. The backhoe comes with increased digging capacity, offering more power and the ability to dig deeper. “The B26 TLB offers more than 4 000 lbs of breakout force and a digging depth of 8’ 4”. Despite increased power, the machine retains a very compact build, allowing it to offer more power even in constrained work spaces.”

Kubota has also increased the stabiliser lift capacity to give operators greater control on any terrain. The improved capacity results in better balance, which reduces unwanted settling. It also means more strength, with rear tyre lift possible while the machine is idling.

The design of the machine also has efficiency and productivity in mind. The B26 features a new and improved bucket-level indicator. “Located on the loader lift arm, the rod indicator of the machine gives the operator the ability to check the level when using other implements like a pallet fork, and allows them to easily check level when using the bucket,” explains Bergmann.

With ease of maintenance and safety in mind, the B26’s brace-less loader frame design improves visibility and offers easier access under the hood. Meanwhile, lubrication points on the loader are conveniently located, eliminating the need to reposition the loader during lubrication. Headlights have been installed on the canopy to provide illumination for safe operation during night work. Optional front work lights provide an even greater field of view.

“Signal and work lights have been installed on the ROPS and canopy respectively. The height of the lights provides greater ground coverage during night work for backhoe or three-point hitch work. Optional work lights provide an even greater field of view,” explains Bergmann.

B26 Ease of operation

A machine’s ease of operation has been proven to allow for greater productivity. With that in mind, the B26 comes with a range of features aimed at easy operation. “Kubota has moved the engine throttle and starter switch to the right side of the operator seat to make it easier to reach when operating the loader or the backhoe,” explains Bergmann. “The loader joystick is mounted onto the side console to give the operator better control of the machine’s loader. This allows the operator to utilise multiple functions with ease. Along with the cup holder, these features help reduce operator fatigue.”

Meanwhile, greater manoeuvrability is ensured by the ease-to-use three-range hydrostatic (HST) transmission. Low effort is needed for the single HST pedal to control both speed and direction changes quickly without shifting or clutching. Forward and reverse are simple when using the loader, enhancing control when working in tight spaces.

The independent PTO keeps stopping to a minimum. “With this handy feature, the operator can stay productive by engaging and disengaging the rear PTO without ever having to stop the tractor,” says Bergmann.

The B26 TLB also places major focus on operator comfort. The machine comes with more comfortable and ergonomic seats. The new deluxe seats are more cushioned to reduce fatigue, even when working long hours. “Simply lift a lever and rotate the B26’s deluxe seat from forward facing to rear facing and back again. It makes switching to backhoe operation a snap,” concludes Bergmann.

This article was feature on Africa Farmers Review [click here]

This article was featured in Capital Equipment – Sep 2018.

This article was featured in FarnTech – Nov Dec 2018.