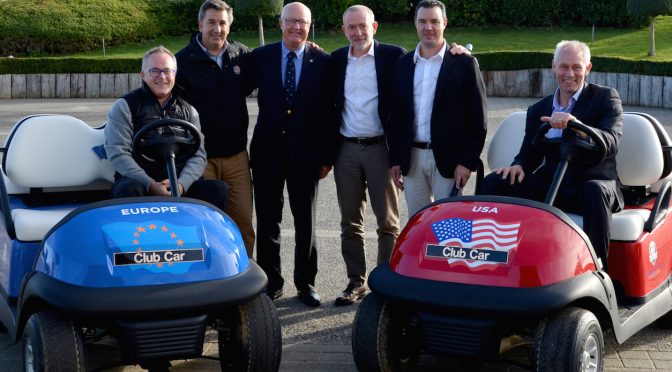 Smith Power Equipment (SPE), Southern African distributors of Club Car, the world’s largest manufacturer of small-wheel electric vehicles, has announced that Ryder Cup Europe has extended its long-term agreement with Club Car, which will see them providing a fleet of more than 500 vehicles for the 2018 Ryder Cup at Le Golf National, on the outskirts of Versailles near Paris.

Club Car, as the Official Supplier of the European Tour will provide a fleet of vehicles that includes golf cars, utility and transporter vehicles, essential in the operation of golf’s most prestigious team event.

Much of the fleet will be used by Rules Officials, television production teams and staging staff to ensure the smooth running of the biennial match, as well as specially equipped captains’ cars to be used by the European and U.S. captains and their vice-captains during the matches.

Richard Hills, Director of Ryder Cup Europe, said: “Club Car is among the most respected brands in golf and, having now worked with them for almost 20 years, we had no hesitation in extending our existing agreement.”

“The quality of their product, their commitment to excellence in everything they do, and their understanding of the unique demands of this great event, makes them an ideal partner to deliver such a mission critical service.”

Club Car has been associated with The Ryder Cup since 1997, the last time the event took place in continental Europe, with many memorable images capturing Cub Car vehicles’ role in the matches, not least of the legendary Seve Ballesteros, who was regularly seen navigating the course at Valderrama on route to victory.

Marc Dufour, Chief Executive Officer of Club Car said: “Club Car’s historic association with many of the game’s leading organisations, golf destinations and tournaments around the world has enabled us to fully understand the specific needs of one of golf’s most iconic events.”

“This experience ensures Club Car continues to provide the top class service and operational support required for golf’s most prestigious event and we look forward to continuing our close and trusted partnership for many years to come,” he said.

Speaking from Le Golf National during the Ryder Cup Trophy Tour, Marco Natale, Vice President of Club Car in EMEA, said: “Many Ryder Cup captains and vice-captains have commented on the important role Club Car vehicles have played during the match itself and everyone at the company is extremely proud of our on-going role in one of sports greatest events.”

Club Car in South Africa said they are delighted about the news of the extended contract. “This is strong confirmation that Club Car is the most respected golf cart brand in many very important golfing circles. I know the thousands of Club Car users in South Africa will be just as pleased as we are,” says SPE’s Steve Mangold.

This article is from Golf Business News.

This article was featured in the tee-and-sandwedges-oct-2016.