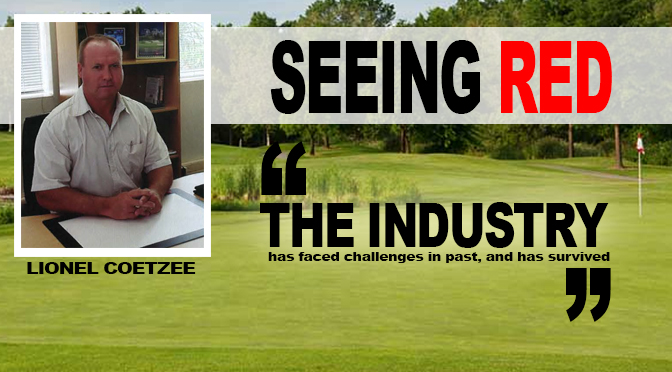 The instantly recognizable Toro range of equipment in red livery can be seen operating on premier golf courses around the world. Lionel Coetzee of Smith Power Equipment, the agent for the famous brand. talks to Golf Industry SA. Any major supplier to the golf business is well-qualified to make an educated assessment regarding the overall well being of golf clubs. Despite the fact that almost everyone in the golf industry believes that we are in for a tough time, Lionel Coetzee, a director of Smith Power, remains upbeat. “We are fortunate in having the unwavering support of our suppliers, and Toro USA together with other manufacturers do everything in their power to ensure that we have excellent backup,” he says. “Of course having healthy relationships with the people within our industry is so important.”

The list of golf clubs and other sporting facilities that swear by the Toro brand is an impressive one, and there is good reason for this. “The team at Smith understands just how critical it is to offer our client base a quality product, and our levels of service play a huge role in our success. I am proud to say that list of our current customers, which continues to grow, bears testimony to this,” he says.

A keen golfer who plays off a single figure handicap (he is a member of Royal Johannesburg and Kensington), Coetzee feels for the golf clubs that are under a huge amount of financial strain as the number of rounds falls and membership retention becomes more difficult, but he believes that there is an upside.

“In my experience it has been encouraging to see the unwavering passion in the golf business – there are so many excellent course superintendents and managers in the industry that love what they do, and they are determined to make a success of their operations. With this positive attitude there must be light at the end of the tunnel,” he says, alluding to fact that despite a range of challenges, we continue to create and maintain superb golfing facilities -as good as any country in the world.

“If one considers that we have three golf courses that are rated within the world’s top 100, this says a lot, but besides the courses at these top clubs, we have a host of layouts that compare very favorably with the best anywhere,” he adds.

Coetzee can certainly relate to the difficulties experienced by those tasked with maintaining golf courses, because he has been at the ‘coal face’. “After completing my schooling and a compulsory two-year stint completing military service, I enrolled to study Agricultural Management at Maritzburg University. My intent was to pursue a career with a chemical supply company, which didn’t pan out because of the merger of some of the major chemical companies at the time I completed my studies. What was meant to be a ‘temporary’ job, I started working at the newly built Sakabula Golf Club. It was during this time that I was approached by a legendary figure in the golf industry, Dennis Schmidt, who offered me a post at Mount Edgecombe Country Club. I then began working for Leich Landscapes, who had the maintenance contract at the time,” says Coetzee, who explains that he learned a lot from Schmidt, who had spent many years maintaining the Gary Player Country Club’s course at Sun City.

“Dennis was a patient mentor, and while I was being taught the basics of course maintenance, I also learned the importance of having the right work ethic. I must say that it was not always easy working with Dennis, because he did not accept anything other than perfection, but it was a great experience and I was grateful for the opportunity to learn from one of the best in the business.”

After many changes in the management at Mount Edgecombe, and contractors came and went, Modern Mowers in KZN referred Lionel Coetzee to Wally Bergman, the MD of Smith Power, who offered him a position on the Smith team. “That was almost 15 years ago,” Coetzee tells us.

“Looking forward, the reality is thatwe are going to live with the fact that the landed cost of imported equipment,fertilizer and other chemicals will continue to rise, and unless the golfing consumer is prepared to bear the burden of price hikes, clubs will have to change the way they maintain their courses,” says Coetzee. “Like it or not, many facilities will have to adopt a difference approach – frequency of mowing will have to be reduced, groomed areas will have to be shrunk, and even the equipment used might have to change. We may well see tractor-drawn gang mowers being used to cut rough and other areas at certain courses as was done years ago, which would certainly cut costs. Of course members and visiting golfers will have to accept that unless they prepared to pay a premium for beautifully-groomed playing surfaces, they will have to live with less than perfect conditioning.”

We are told that when Coetzee first began playing the game as an eight year-old, he had only one club, a hickory shafted, hand-forged iron with a wrapped leather grip (which he still has). “The father of a friend of mine was a fanatical golfer, who used to play a few times a week, and he introduced me to the game.

Growing up in the Natal Midlands, I would play at Howick Golf Club where I eventually became a member and received my first official handicap. We also played at Bosch Hoek, a great nine hole layout, and while the condition of these courses was nowhere near the standards of most layouts today, we knew no better and learned to love the game all the same,” he says, while taking a philosophical view of the general state of the game. “The industry has faced challenges in the past, and has survived. There is no doubt that we will get through the current tough times, and where we can be of assistance to our customers, we will always help out.”

This article was featured in the Golf Industry SA – Jan 2016.