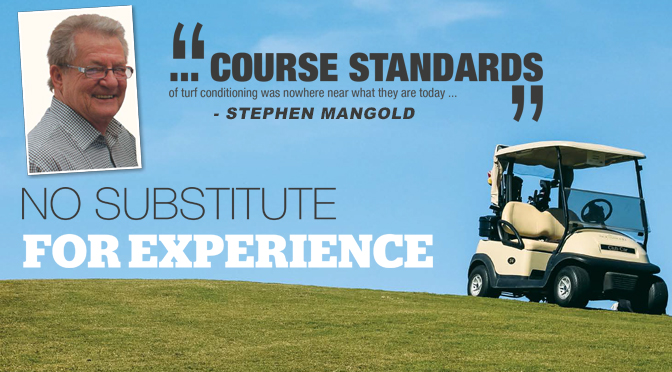 When Stephen Mangold began his working career in the family business of Mangolds more than five decades ago, golf clubs were run very differently.

“Back in those days, when our company had acquired the Ryan Turf maintenance equipment agency for South Africa, golf clubs were managed by a club secretary, a resident golf professional and a greenkeeper. Often the club pro would double up as the person responsible for the upkeep of the course. The game was relatively affordable, but of course standards of turf conditioning was nowhere near what they are today, and even having an irrigation system, much less one operated via a computer, would have been considered the stuff of science fiction,” he says.

“Levels of expertise in all aspects of management at clubs have improved considerably, and there has been a huge change in turf maintenance equipment; a huge amount of research and development has resulted in machines that are far more sophisticated. When our company secured the Jacobsen agency for South Africa, I became involved in the golf side of our business full time. Up to then we had focused on turf aerators, scarifiers, sweepers and sod-cutters, and we supplied landscapers, and various sports facilities,” he adds.

The Mangold company was bought by CSE in 1993, at a time when the golf estate boom was gaining traction, there were umpteen golf estates being developed, and until the early 2000s, it seemed there would be no end to this frantic development.

“Looking back, it is interesting to see how club management evolved – and most of our big clubs today are run more like small corporations; CEOs in charge, assisted by financial managers and other people such as event/marketing managers etc. It has also been fascinating to see how the game itself has been changed by the introduction of high-tech equipment and much-improved golf balls that fly further and straighter. Just how much this technology has benefitted the average golfer can be questioned, because average handicaps haven remained much the same as when I joined Bryanston Country Club more than 40 years ago. The game is still about trying to get a little ball into the hole in the fewest number of shots,” says Mangold.

With the increased demand for perfectly groomed golf courses, few golfers have an understanding of what this entails, and the costs of keeping a large staff and a sizeable fleet of equipment. “I can sympathise with course superintendents – many of whom are expected to work wonders with limited resources. I cannot see this situation changing anytime soon, and as long as our currency remains undervalued against hard currencies, it will be difficult for clubs to justify spending the sort of money required to keep their courses in excellent shape. Many are nervous about passing on these costs to the consumer for fear of losing members and visitors – it is a difficult situation,” admits Mangold.

After being in the maintenance equipment business for so long, when Smith Power took over the Club Car agency, Steve Mangold was the obvious person to take over the sales function of these golf cars, which he didn’t find to be too difficult. “When Club Car was added to our product range, the fundamental difference was that when clubs decide to replace a fleet of carts, they realize that they are investing in a revenue generator, whereas replacing maintenance machines, the effect of this is not seen on the bottom line – at least not in the short term,” he adds. “Anyone in sales has to have confidence in the products they sell, and I must say that like the Toro brand, Club Car has earned an excellent global reputation, and our company is proud of the relationships we have built up with our customers over the years. We go to great lengths to exceed expectations when it comes to service. Price is obviously important, and we do everything we can to offer the best possible deals, which means operating on extremely tight margins.”

Although Mangold has no delusions regarding the difficult economic conditions being faced by golf clubs over the next few years, he does believe that the club business will bounce back as it has always done in the past. “It seems to me that time constraints on golfers is just one of the problems, and creating an experience is important – the traditional club culture has changed, and in promoting the game, the modern club will have to cater to younger market, and offer family-friendly facilities. I can foresee successful clubs becoming lifestyle centers with golf being just one of the attractions.”

You can download the article in PDF. GCM – Jan/Feb 2016 Edition.